Cumulative SVOD penetration is less than 3% of the population and 10% of households, indicating significant scope for future growth as investment in local & Asian content accelerates

(SINGAPORE, 19 JANUARY 2021): Media Partners Asia (MPA) announced today that total cumulative paying customers to subscription video-on-demand (SVOD) services across the top 10 operators in Indonesia had reached approximately 7 million as of mid-Jan, 2021, a net addition of 3.6 million new subscribers between 5 September, 2020 to 6 January, 2021. The research, published by MPA's consumer insights division AMPD Research (AMPD) shows the top 4 platforms accounting for 83% of the total subscriber base with Disney+ Hotstar in the lead with 2.5 million customers, followed by Viu (1.5 mil.), Vidio (1.1 mil.) and Netflix (0.85 mil.). According to AMPD, SVOD customers in Indonesia are now subscribing to an average of 2.8 services versus 2.1 in Q1 2020. Customers are now paying an average of US$2.1 per month for SVOD services versus US$2.8 in Q1 2020.

"The growth of SVOD in Indonesia, the most populous market in Asia after China & India, is encouraging but has a long way to go. Cumulative subscribers represent less than 3% of the population and 10% of households. Much of the recent growth is driven by aggressive mobile distribution and pricing with Disney+ Hotstar leading the way through its partnership with Telkomsel. At the same time, Viu and Vidio continue to grow through mobile, and Netflix has capitalized on its mobile pricing plans. SVOD consumption through the big screen has also started to grow, benefiting players such as Vidio in particular along with the broader market. Disney's consumption continues to grow on the back of its core franchises, including family movies & series, local movies, general entertainment episodic series and animation. Vidio & Viu, both freemium services, continue to experience heavy consumption with Vidio benefiting from original local dramas and Viu capitalizing on acquired Korean day & date content. We also expect subscribers to WeTV and iQIYI to grow in the future as both players are starting to experience significant consumption for local, Chinese and Korean dramas and Japanese anime on their free tier." 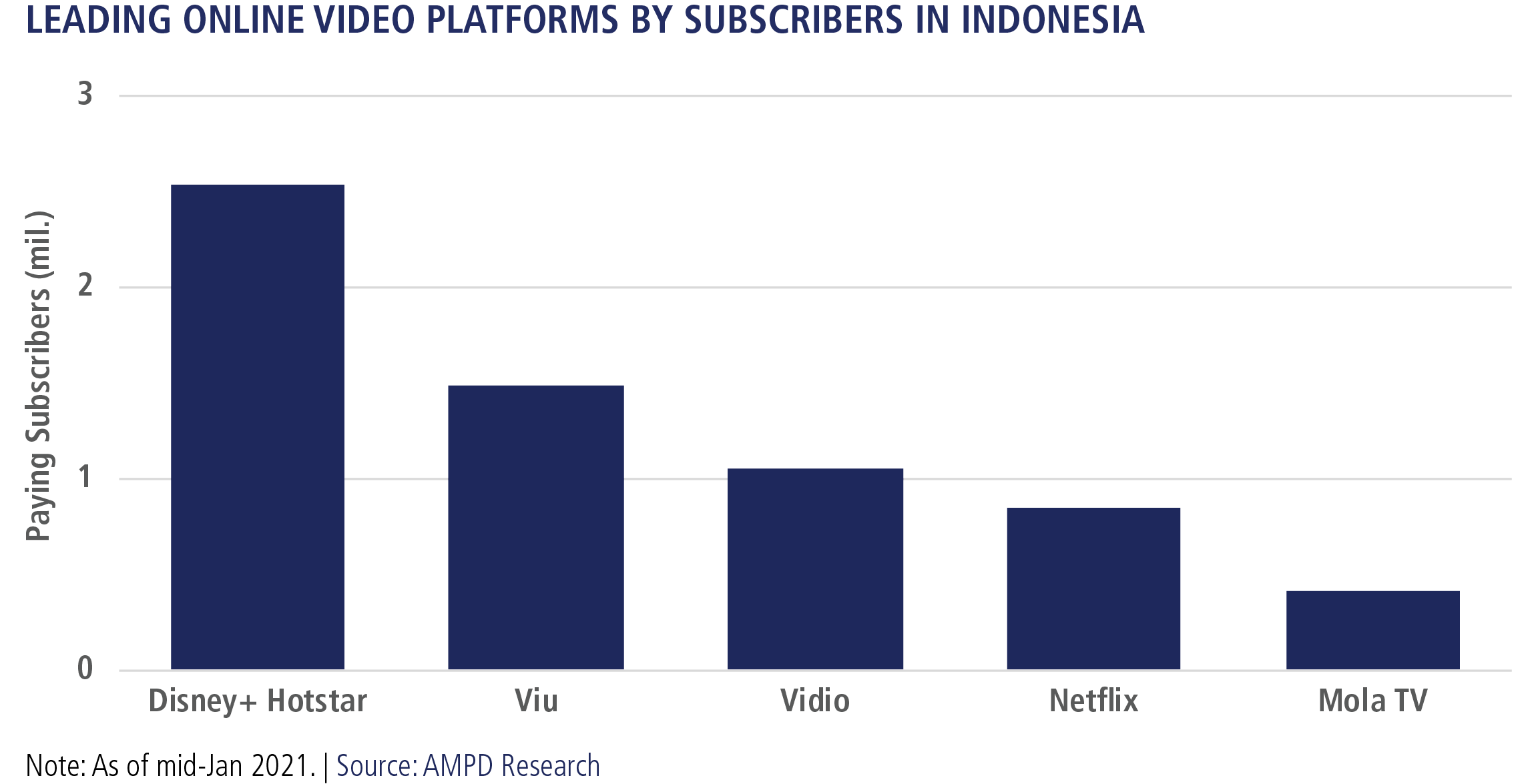 · Disney+ Hotstar, launched in Sept. 2020, offers movies, series and factual content from Disney, Fox, Marvel, LucasFilm, Pixar and National Geographic, Disney+ originals and over 250 local films, including new releases. Disney+ Hotstar has a 2-year exclusive mobile partnership with Telkomsel, allowing the telco to bundle and market Disney+ Hotstar with its mobile data plans. Average monthly subscription prices range from US$0.8 to US$1.4 for Telkomsel users or US$1.1 to US$2.6 for direct subscribers.

According to AMPD's passively collected data, Disney's content acquisition strategy has further emboldened its attractiveness to Indonesian consumers, with more than 20% of all Disney+ Hotstar's minutes consumed in December 2020 being delivered by locally acquired content. Major Disney+ Originals, such as The Mandalorian have also broken through with Indonesian audiences, with both series performing in the top ten shows in Q4 2020. Given that Star Wars franchise has historically underperformed theatrically compared to other Disney-owned properties, it seems that the Mandalorian may be acting as a "bridgehead" attracting Indonesians to the Star Wars franchise in numbers not previously seen.

· Freemium platform Viu leverages premium, first-window Korean content and a growing collection of local acquisitions and originals to drive engagement on its paid tier. Hard-bundled Viu subscription is available through Telkomsel, Tri and XL Axiata, as well as data allocation and carrier billing options. The monthly subscription is priced at US$2.0, although discounted and sachet rates are widely available.

· Netflix offers premium movies and series spanning Hollywood, Korean and other Asian, including acquired local films. Netflix's mobile plan is competitively priced at US$3.6 per month; other tiers are priced between US$8.1 to US$12.5 per month.

AMPD Research is a leading media insights specialist, measuring and decoding consumer behaviour across the digital economy, including online video. AMPD has built a series of digital measurement panels using groundbreaking passive metering technology developed by UK technology firm, RealityMine.  With passive measurement panels deployed across 10 markets in the Asia Pacific and Latin America, AMPD provides its clients with an unparalleled view into digital consumption habits across video, gaming, audio streaming, and e-commerce on smart devices and computers.  As living room device consumption matures across many developing markets, the AMPD and RealityMine partnership is piloting new technology that will measure the total digital entertainment ecosystem by adding the measurement of smart TVs and set-top boxes in 2021.

RealityMine enables many of the world’s largest market research and media organisations to monitor real consumers on multiple devices, across all major platforms, revealing unique insights from real life consumer behaviour. The firm’s RealityMeter can be deployed across Android, iOS and desktop platforms, and is deployed by leading panel owners and research clients across five continents. RealityMine is headquartered in Manchester, England with offices in London, Stockholm and Sydney.